As Seen in Fig Columbia

We are proud to have been featured in Fig Columbia’s Summer 2020 Issue! Read below for our article from the magazine.

Each July, families and friends gather up and down South Carolina’s coastline to celebrate Independence Day together. With their American flags, beach towels, patriotic themed attire, and their favorite beach games, they flock to the shores to spend a day in the sand and in the sun. In 2008, good friends Johnny Folsom and Toddy Smith were enjoying their beach vacation over the 4th of July holiday and thought about how they were enjoying time with family and friends while those in the military were currently away from home, defending our country. They decided that these soldiers needed to be honored, so they created Salute Fromthe Shore as a flyover of the South Carolina Coast to honor our military.

“As you know, South Carolina is a very patriotic state,” said Cam Smith, one of the co-founders for SaluteFrom the Shore. “We figured the coast of South Carolina would be a great platform for an audience to gather and show gratitude to the military.”

For the last decade, Salute From the Shore has joined in on the annual 4th of July celebrations with their patriotic flyover and show their appreciation for active duty members, for veterans, and for their families. The flyover spans the entire South Carolina coast as it begins in North Myrtle Beach around 1pm on the 4th and continues down the coastline to conclude just outside of Bluffton. Everyone on the beach—whether you’re in Litchfield, Folly, Kiawah Island, Edisto, Sullivan’s Island, or anywhere in between—has a front row view to the incredible air show. It’s a tradition that has grown over the years as more and more families plan their summer vacations around being at the beach during the first week of July each year.

This year’s Salute From the Shore looks to be one of the best ones yet. Two F-16s from Shaw Air Force Base and a C-17 from Charleston Air Force Base will take to the skies first as they start off the Salute shortly after 1pm on July 4th. Following them will be a fleet of really cool, civilian-owned and flown vintage airplanes. These planes fly slower than the military aircrafts and will extend the fun throughout the afternoon as they make their way down the coastline.

This summer, book a beach house, condo, or hotel room along the South Carolina coastline and join in on the patriotic celebration with your family and friends as we #SaluteFromTheShore!

To learn more about Salute from the Shore and how to donate to their mission, visit their website at salutefromtheshore.org. 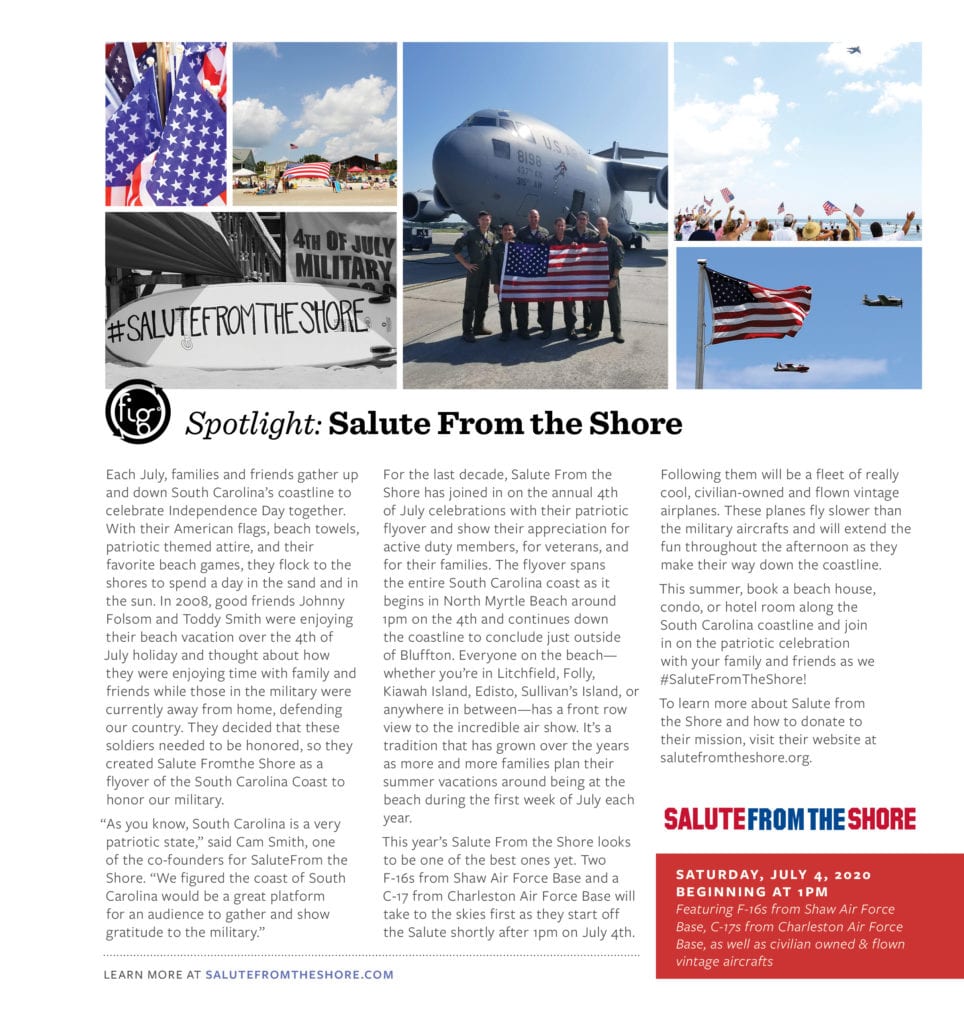