Salute from the Shore II in Review 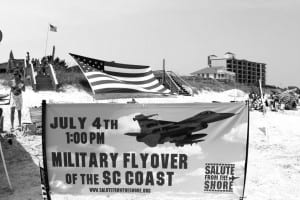 Salute from the Shore II was an amazing day and we are truly humbled by the number of people who came to the beaches to honor our armed forces on Independence Day. We have been overwhelmed by the amount of support for this patriotic tribute, and have received an incredible amount of pictures, videos and stories from people who were able to participate.

We sincerely regret that a safety concern prevented the Flyover from reaching Hilton Head. The FAA was included in the planning process as were the incredible professional aviators from the 20th Fighter Wing, but the airspace was not clear enough to allow a safe flyover. We are already working to see how this can be avoided next year, and we hope the patriotic people of Hilton Head will be able to take part in this wonderful event next year.

We are hard at work on our official video tribute and plan to release it in August. We are excited by all of the footage and can’t wait to share this with everyone around the world!

We will also announce a winner of the Salute from the Shore Best Beach Display Contest very soon, so stay tuned!