Salute from the Shore III

“Salute from the Shore III” military flyover of the South Carolina coast to be flown July 4th by last armed forces to leave Iraq!

This July 4th, beachgoers along the South Carolina coast will once again experience an exciting and memorable way to honor our Armed Forces and their families who protect the freedom we celebrate on this patriotic American holiday during Salute from the Shore III.

Beginning in Little River at 1:00 pm, F-16s of the 79th Fighter Squadron “The Flying Tigers” of the 20th Fighter Wing stationed at Shaw Air Force Base will conduct a flyover of the SC coast. The flight will cover every beach on the SC coast before concluding south of Hilton Head Island at about 1:30 pm. The event presents a unique opportunity for patriotic Americans to connect with each other up and down the coast on the July 4.

We are especially honored to have the ‘Flying Tigers’ flying the mission this year. These pilots were the very last U.S. armed forces to leave Iraq. They flew air support while ground forces literally closed the gate on their way home. We are honored by their participation. Salute from the Shore is sponsoring the event with the assistance of the Town of Pawleys Island for the third consecutive year.

For Salute from the Shore III, organizers are excited to announce that a 5th F-16 will accompany the flyover. This aircraft will have a photographer who will record the flyover from above. In addition, the group is honored to announce the addition of an aerial parade, including vintage military aircraft that will follow the F-16s from Myrtle Beach to Folly Beach. This special procession is being piloted by private aircraft owners who will host military veterans aboard their aircraft. These planes are much slower than the jets, so participants are requested to be patient while waiting for these special aircraft.

Salute from the Shore urges visitors to offer their own individual salute by wearing red, white and blue on the beaches during the flyover. The organization also encourages participants to tell their personal stories about why they love America by shooting their own video and images of the event for sharing on social networks to be seen by American Armed Forces deployed throughout the world.

People who “like” Salute from the Shore on Facebook (www.facebook.com/SalutefromtheShore) can upload photos directly. They are also encouraged to follow on Twitter (@saluteshore) and to use the hashtag #saluteshore on tweets and photo uploads. More information is available at www.salutefromtheshore.org.

Once complete, Salute from the Shore will edit the footage into a video tribute to our Armed Forces. Last year’s Salute can be viewed at www.salutefromtheshore.org.

The Salute from the Shore flyover can be seen at approximately the following times along the South Carolina coast: 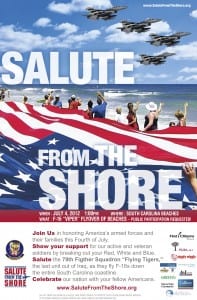